Here you will find news articles, press releases and occasional blogs about the charity's activities.

Children who have had a Drink

Just before the end of last year, the Scottish Government published the Scottish Schools Adolescent Lifestyle and Substance Use Survey (SALSUS) alcohol report for 2018 which showed among all groups the proportion of pupils who have ever had an alcoholic drink has increased since the last survey in 2015. Drinking is also on the increase in all groups except 15-year-old girls. In addition, there has been an increase in the proportion of pupils who had ever been drunk, except for 15-year-old boys.

John Hamilton, Chairman at Fife Alcohol Support Service (FASS) asks the question “What's your poison? Is it alcohol?” John then continued “It's Britain's deadliest drug, it costs the NHS billions each year, and shortens our lives – yes, this is the reality of alcohol.”

“In Britain we are particularly keen on drinking alcohol, in fact, so keen that our consumption has nearly doubled since the Sixties. According to the Global Drug Survey, Britons get drunk an average of once per week, and one in every ten of us are drunk on five or more days every single week!” John did not stop there. “A staggering 10.8 million of us in Britain drink at levels that pose a risk to our health, and not surprisingly, alcohol is now the leading cause of death for men aged between 16 and 54, cutting life short for around 30,000 people a year.”

“Curnie is an old Scots word for a small gathering of people” said John Hamilton, Chairman at FASS (Fife Alcohol Support Service) based in Kirkcaldy, “and the Curnie Clubs that FASS runs do help to address social isolation and loneliness and promote social inclusion at different locations all over Fife.”

He continued “It's basically getting out of the house for a cuppa and a good blether, being accepted for who and what you are; it's also meeting new friends, having some laughter, getting creative with arts and crafts, also baking and cooking and even going on outings, visits and walks. Curnie Clubs do all of these activities!” 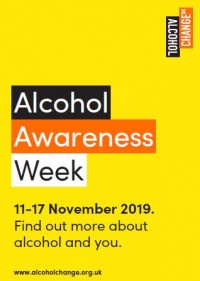 FASS joins together with 2,000 other community groups to highlight the risks of drinking too much for Alcohol Awareness Week 2019.

How many units are in a pint of beer or glass of wine? How long does it take your body to break down alcohol? And what does alcohol do when it reaches your brain? These are just some of the questions being explored for this year’s Alcohol Awareness Week, taking place between 11-17 November, led by Alcohol Change UK.

This week Fife Alcohol Support Service will help to highlight the impact that alcohol can have on our bodies, our lives and those we love, and how by making changes to our drinking behaviour we can become healthier and reduce our risk for many serious health conditions including cancer, mental health problems, and liver disease.

We know more about Milk than Vodka!

“I know that it sounds daft, but it is true. There is more information on a pint carton of milk than there is a on a bottle of vodka, or any other spirit” said Jim Bett, Service Manager at Fife Alcohol Support Service (FASS) when we spoke recently at the FASS office in central Kirkcaldy.

Jim continued “The Scottish government is now considering taking some form of control of alcohol labeling, and in my opinion, and that of FASS as well, this is not a minute too soon.”