The Face of Volunteering

Kirkcaldy radio presenter and author, Lisa Young recently hosted another great episode of her successful Holding the Space radio show on K107FM. This time Lisa explored the world of volunteering with the staff and volunteers of local charity Fife Alcohol Support Service.

The Face of Volunteering featured interviews with volunteers, staff and trustees of the charity recorded during their recent Annual General Meeting. In the interviews, they talk candidly about their personal experiences of volunteering, why and how they began and offer many insights into the work of the charity.

Lisa explained “It was a pleasure to hear the stories of volunteering from FASS and how they, in their 41st year, help others in the community”

The show can be heard here

The Face of Volunteering with Fife Alcohol Support Service (FASS) is also available as a Podcast on most major hosts.

Earlier, at a packed meeting at the Town House in Kirkcaldy, venue for this year's Annual General Meeting for Fife Alcohol Support Service (FASS), Jim Bett, Service Manager, highlighted the charity’s successes and observed that the Kirkcaldy-based charity had enjoyed one of its most successful years since it began operating 41 years ago. Jim recounted that during the past 12 months “FASS has been recognised in the Scottish Parliament for its invaluable work with some of the most vulnerable people in Fife, and in June, FASS received the Organisation of the Year Award 2019 from Fife Voluntary Action.” 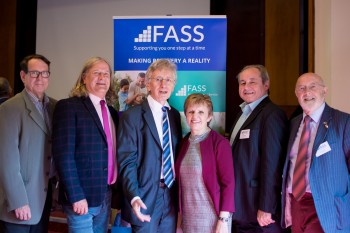 Jim went on to praise the contribution made by volunteer counsellors and support workers to the charity’s helping services “The feedback we received from their clients was very positive, whether that be self-reports of personal achievements within therapy programmes, or their observations about the standard of service received.”

Jim highlighted the success of the charity’s services including “our Alcohol Counselling Service which has been recognised by COSCA, the professional body for counselling and psychotherapy in Scotland. Our ADAPT Substance Recovery project also made great strides forward, developing important new services for people experiencing near fatal overdoses. ADAPT is also contributing to a new Hospital Liaison Service, a multi-disciplinary Team funded by the Scottish Government, that will support deeply vulnerable individuals leaving hospital following medical treatment for drug and alcohol related conditions.”

He also highlighted the success of the charity’s Curnie Clubs that helps people overcome social isolation, noting that it had been re-funded by the National Lottery Community Fund for a further 3 years.

The AGM concluded with an inspiring talk by David Torrance, MSP who spoke about the value of volunteers to communities in Scotland. He highlighted the benefits for young people, citing examples of people who gained enormously in life and future career from their time spent volunteering. He also recounted his own his long-term involvement with the YMCA and the Scout movement in Kirkcaldy.